Interview with Micky and Stew from Dear Superstar 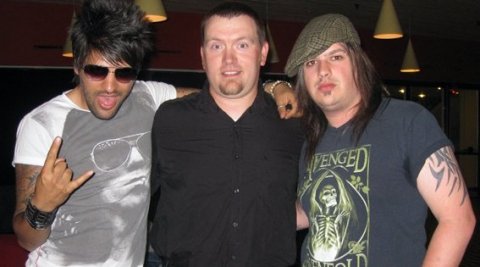 Micky, me and Stew

Calle: How did you guys meet?

Micky: We’ve been all friends for years and some of us went to college together and school. And we grew up in a small town in the suburbs of the big city and there is not a lot to do then play music, so we all got together for the same passion of music.

Calle: What made you play music in the first place?

Micky: Well I grew up with my parents listening to a lot of bands like Led Zeppelin and stuff like that. So I had that great music playing in the background all my childhood. That’s what made me wanting to play music. I have tried other things, but nothing makes me feel passionate about it the same way music does. So that’s basically it. Micky: My personal influences goes back to the 80’s with bands like Mötley Crüe, Guns ‘n’ Roses, Ratt, Warrant and Hanoi Rocks, that we recently toured with. All of those bands have a good place in my heart, but I also listen to a lot of modern bands like Papa Roach who we are touring with at the moment. Also Avenged Sevenfold and Atreuy, but we are really a diversity kind of guys and our lead guitarist is really in to his blues like B.B. King and all that kind of scene as well.

Calle: Why the band name Dear Superstar. Does it have a special meaning?

Micky: No not rally. It’s all about kind of writing your own destiny. The Dear part is like when you write a letter you know Dear Sir Dear Mr. And the Superstar part of it is just that we want to be Superstars. Calle: Your second album “Heartless” was released on Demulition/DR2 records earlier this year. How has the response from the critics and the fans been so far?

Calle: How do you write the songs and where do you find the inspiration for the songs?

Micky: Inspiration wise. I think to many people in today’s society sit around and spent to much time sitting down watching television and we have never done that. We have never been lazy people, so what we write about is personal live experiences and we have been out there and we have done some crazy shit and some stupid shit. We have gotten drunk and we have been traveling around and we have all done things we want to write about. I think that’s the key to any musician’s life. Just go out there and live it. Don’t let life just pass you by.  Song writing wise there’s not a member of the band that just writes a song. We get together in the rehearsal room and work on the songs as a band. Even the vocals, I don’t necessarily write all the lyrics. It’s a five way spilt in everything.

Calle: If you could chose one song you wish you had written, what song would that be?

Micky: You know it’s a really hard question. There are so many good songs that I wish I had written, but the band Jet, pretty much anything that they wrote. Also Seize The Day by Avenged Sevenfold is fucking unbelievable. It would have been great to have written some of the Led Zeppelin or Queen songs as well.

Calle: To people who haven’t heard Dear Superstar YET, how would you describe your sound?

Micky: Yeah we get this a lot, but we are pretty much just a balls out rock ‘n’ roll band. We don’t pretend and we don’t think we a bigger then we are. We just go out there and play straight rock ‘n’ roll. We’re so passionate about our music so it all comes out when we go on stage. If you come to our shows you can expect an rock explosion and a bloodbath. Calle: You have played with some great bands like Papa Roach and Buckcherry, but also Hanoi Rocks and Bullet For My Valentine etc. What other bands would you like to play with if you get the chance?

Micky: Crüe fest with Mötley Crüe would be awesome. It was actually Def Leppard that got me into rock ‘n’ roll, so opening for them would be great. We’re actually playing Download festival this year and we are playing the same day as Def Leppard are headlining, so I’m fucking stocked about that.

Calle: That was actually my next question. For a British band to play at Download that must be a dream come true?

Micky: Yeah you know it’s the Mecca for rock ‘n’ metal. For years I have been on the fan site of the barrier and for us to have the opportunity and play the festival is a dream come true. I still can’t comprehend in my mind. You know touring with Papa Roach and now playing Download is so we feel really blessed at the moment. We feel so lucky to be doing it and we’re riding on a wave at the moment and e feel so appreciative of it all.

Calle: Do you have a special thing you do before going on stage?

Micky: We get ourselves wired up and crazed up as much as we can. The five of us and even our tour manager and our sound guy is jumping up and down and hitting each other. We’re doing everything we can to get ourselves wild up. Calle: How would you describe the music scene where you come from and in the UK in general?

Micky: The music scene in UK is really, really, really diverse at the moment. It’s really hard for a UK band to break the UK, because people are so excited to see the American bands and other European bands that they forget to give the UK bands much of a break. But when that is said I was worried that the rock scene in UK was dead, but there are so many fucking great bands that are now beginning to pull bigger crowds. So the people are coming more and more out of their house.

Calle: What bands would you recommend?

Micky: There’s a band called Heaven’s Basement and some other guys called The Crave.

(Stew enters the room and sit down).

Calle: Is this your first concert/visit to Denmark?

Micky: Yes this is our first time in Denmark. On previous tours in Scandinavia we have played in Finland and Sweden. So it’s great to finally play here in Denmark.

Calle: What do you think of the Copenhagen so far?

Micky: It’s expensive. The beer is twice as expensive here then it is in the UK. We went out last night and went to different places.

Stew: We went to Christania (The free town).

Micky: Yeah that was pretty cool.

Stew: Other then that we just walked around as much as the city as we could.

Micky: We ended up at the Hard Rock cafe.

Calle: Do you have any plans of touring in USA?

Micky: Yeah for sure, but right now we want to tour Europe and hopefully we can go to the States some time.

Stew: Right now we want to concentrate on Europe and do a couple more tours and then try to go to America. The States is definitely a dream.

Micky: Maybe we can hook up with Papa Roach over there. Or Buckcherry. Those guys are really cool to. The States is a big thing for us and we definitely want to go there, but also we need the money to do it.

Calle: Where do you see Dear Superstar in 10 years?

Micky: Well it’s not about living in a mansion with a big swimming pool. To us it’s all about making great music and as long as we can do that and get food on the table we are happy.

Stew: As long as people are still enjoying our music. That’s all we care about.

Micky: Yeah as long as people want to hear us we’ll still keep playing. Even when they don’t I guess.

Micky: Stew is on a crash diet and he’s doing well. We are exercising everyday and we usually take a five-mile run every morning.

Stew: That’s another way to see the cities we visit. Calle: What’s the best advice you can give to other upcoming bands?

Micky: Yeah totally, the best advice I can give to a new band is never give up. We have got a song called “Never Surrender” which is all about that. We have been around since 1997 and we have seen so many friends and bands break up and never do anything again. Now ten years later they are working flipping burgers at McDonald or working at the supermarket or something like that. But the only bands that fail are the bands that quit. If you are passionate enough about it and you really wan to do it everything is out there to take. If I were told ten years ago I was opening for Papa Roach in Copenhagen and main Europe, I would have said – That’s never going to happen. But I always hoped that something like this would happen.

Stew: You gonna believe in yourself man and carry on no matter what.

Micky: No matter what shit gets thrown at you just fucking carry on. We have had management that have tried to spilt us up, but we love each other that much, that we wouldn’t let anything thing get us down.

Calle: That leads me on to my next question. Isn’t it hard for a band to find the right management and to make a record?

Micky: Yeah for sure, we have been ripped of and cut up and, but all that kind of stuff has made us stronger. But I think it’s so easy for young bands these days to get seduced by managements and record companies. They offer them the world and take everything from them. Some bands are so hungry for it that they just take the first record company that comes around and sign a deal. Then they get themselves tired in and get ripped of or whatever. It’s a really hard industry that way.

Micky: This year we have actually met people who have changed our opinion o the music industry. It’s not just full of dicks. Our new agent is the coolest guy in the world as far as I’m concerned and our tour manager and the crew are true diamonds all of them. But I think new bands have to really careful.

Micky: Yeah totally, first of all thanks for having us in Copenhagen and we will be back. Next up, if you don’t have the album, buy it, download it, go to the shop and fucking steal it and then spilt I with your friends. I don’t care. As long as you listen to it and like what you hear I don’t have a problem. Thanx!!

(After the interview Stew tells Micky that Tommy Lee is on Papa Roach’s guest list. Mötley Crüe is playing the next day in Copenhagen and I was there to. That’s two great concerts with six great bands in just two days).

Click on the banner to visit Dear Superstar's MySpace site