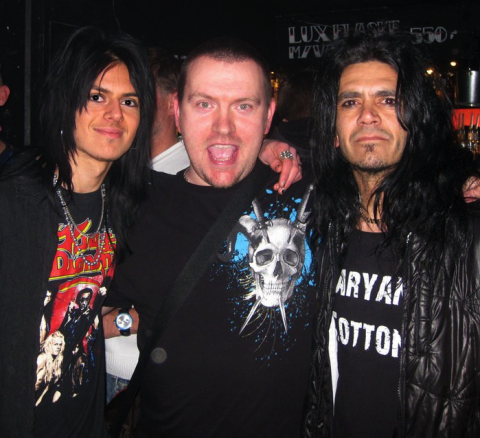 Calle: Your birthname is Jackie Patino and your father is Hal Patino. With a father like Hal, were you raised on rock ’n’ roll?

Maryann: Yeah that's true...yes, you can say I grew up to Rock' N Roll music. There has always been played some good old classic rock tunes at my home, throughout my childhood years.

Calle: What got you in to music in the first place?

Maryann: Well.. I've always concerned myself with many different things, but because I've listened to music since I was a kid, it has always been the right thing for me to do.

Calle: When was Maryann Cotton ”born” and why did you choose a girls name? 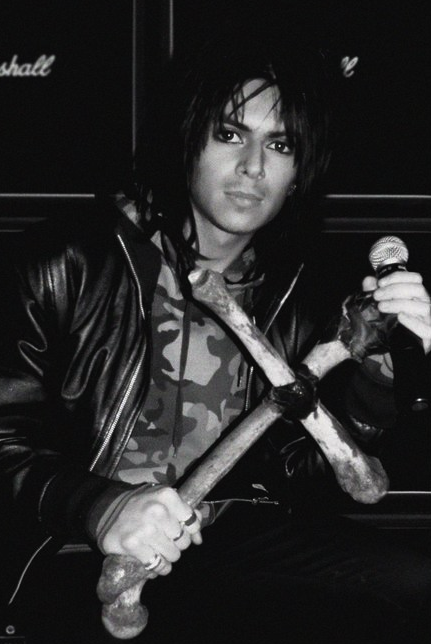 Maryann: After I had appeared on television back in 2006 and there wasn't so much interest around me anymore, I thought it was time to come up with something new and special, then I wanted to create a character like - Alice Cooper, Marylin Manson & King Diamond, ect...And that was actually back in 2008. After that I had to find a name for my band, so me and my dad was looking for some names around on the Internet and in books, and suddenly the name Maryann Cotton popped up! Which we both agreed that the band should be called. The band quickly got related to me, so I decided to take and use the name Maryann Cotton even without knowing who it really was, and what it meant. So i checked it out, and found out it was an old English Serial killer, which was pretty cool & perfect! HA HA ...

Calle: Can you tell us more about the Maryann Cotton character?

Maryann: Well.. I think the character Maryann is too dangerous. He's out of control, and erratic, & I wouldn't hang around with him. Many parents would think he is vulgar, which probably makes it more interresting for the youth. So you can call it a combination of everything. To me there's some dark mystery of Maryann, which I enjoy.

Calle: In your band you have 3 former King Diamond members (Hal Patino, Pete Blakk and Snowy Shaw). How did you get to work with these guys?

Maryann: You know, there are still so much focus on these guys today, and I think it would be a kind of history and a great experience for many people if they joined the band, and after a lot of the demand on whether we would come out and play live, we thought it would be obvious to do, because they also plays on the album. 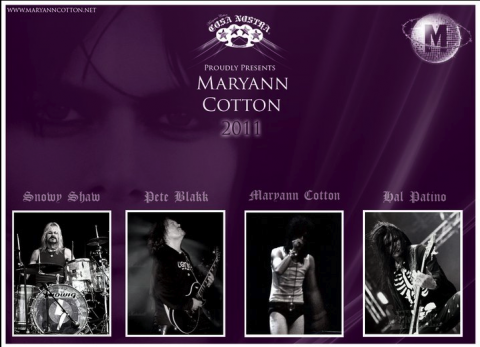 Calle: Do you think it’s an advantage for you to have these guys in the band? I mean, do you think you’ll get more media coverage and maybe radio airplay?

Maryann: Of course it's always good to be surrounded by some good and professional people, but it's ultimately up to myself. You can't live high on whether you know some nice people. You will definitely need to come up with something that is 100% yourself! Even if people like it or not.

Calle: I also read somewhere that King Diamond will do a guest appearance on your album. Can you confirm that? 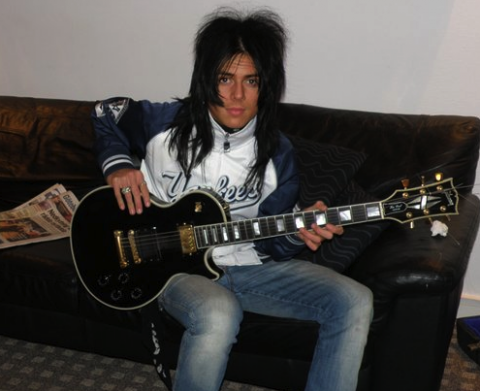 Calle: When can we expect the album to be released and what’s the title on the album?

Maryann: The title song and album will be ''Free Falling Angels'' and if all goes well, I guess this summer will be a huge possibility.

Calle: Can you tell us more about the writing and recording process. Did you write the songs yourself etc?

Maryann: Yes I write all the songs on guitar and piano - and my dad writes 90% of the lyrics. He always has the ''Final Touch'' on everything because he is 50% of Maryann Cotton.

Calle: Who produced the album?

Maryann: The album is produced by my dad, and me and mixed and mastered by Andy La Rocque. 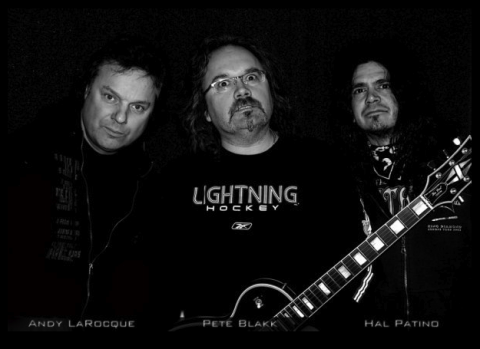 Calle: With all these cool guys in the band, how would you describe YOUR music? Is it similar to King Diamond or totally different?

Maryann: It's funny because the music is totally different from King Diamond's. But you can really hear that it's the same musicians who play on my album. They really have a personal and unique sound, which I think is cool, because 7 of 10 songs is almost pop songs that have been made to hard rock songs because of the attitude in their performance, and their style of playing.

Calle: How would you describe Hal, Pete and Snowy in only three words?

Calle: Do you have any plans on touring when the album has been released?

Maryann: Yes we will do a tour to promote the album later this year, I don't know where and when, but we are working on it right now. So there are a lot of things going on at the moment.

Calle: When/if you hit the road, what can people expect if the go see Maryann Cotton live?

Maryann: I have a lot of plans, which I hope can become relevant at some point. But people can expect to see an event, a rock theater with 100% energy. & I'm sure that everybody will have some different stories about the shows, which i think is great so let the audience have their own stories, cause I think it's good if people got their own views on things. 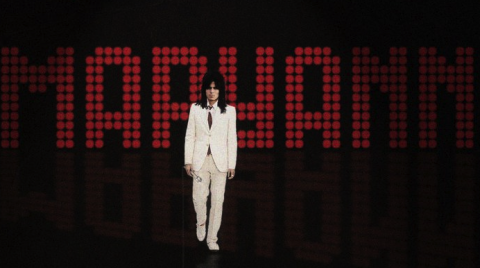 Calle: Where do you see Jackie Patino and Maryann Cotton in 10 years?

Maryann: Well.. Jackie is probably down to earth with a good family and some wonderful kids. While Maryann lives on, as a more vicious - arrogant character, but stil indestructible - HA HA

Calle: What’s the best advise you can give to other upcoming artists?

Some questions outside Maryann Cotton’s music: 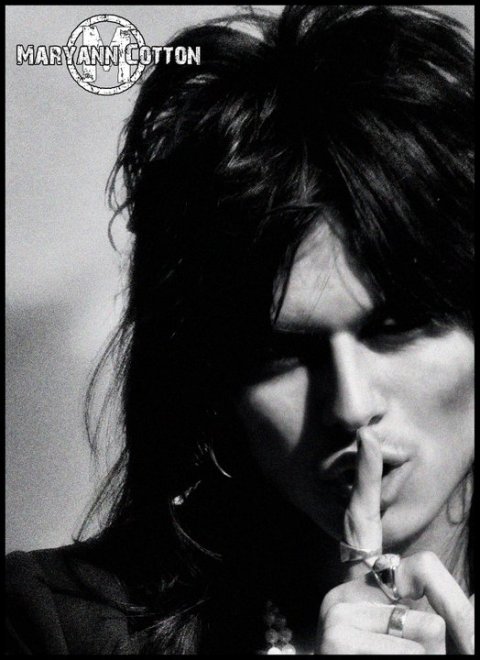 Maryann: I can't really remember, because you can say me and my brother was actually born backstage at Motorhead, Alice Cooper, Mercyful Fate - King Diamond, and groups like that, & we've been taken to so many concerts since we were kids. So it's hard to say ...

Calle: What was the first CD and the last CD you bought?

Maryann: I’m not sure, but the first CD must have been something with Alice Cooper, or Elvis? - and I actually think that the last one was a blues/jazz record?

Calle: Who are your personal influences?

Calle: How would you describe the Danish rock/metal scene and can you name a few bands you’ll recommend people to check out?

Maryann: Actually I don't really listen to the Danish bands - so if  i should recommend a band, I'd definitely choose the good old Gasolin! I do not really know what I think of the Danish scene? There is not any unity between Danish bands anymore, people talks bad about each other and are so envious, personally I feel it every day (laughs)... But it's probably just the way it should be here, I guess. I think it's good for Denmark that we have a band like Volbeat, which may represent the Danish rock scene. 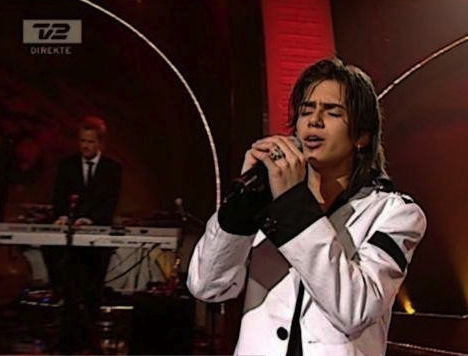 Calle: In 2006 you performed in the Danish tv-show ”Scenen Er Din” (Star Search). How was that experience?

Maryann: It was a great experience, especially for a 14-year-old boy. I'm almost sure that if you ask any kind of a 14-year-old kid, they will do anything to get the chance to perform live on national television, in front of 2 million people. So it has certainly been one of my life's greatest experiences.

Maryann: I enjoy playing football, which I've played at a high level in Copenhagen. Otherwise I use the time to go shopping with my family & girlfriend, and then i spend the rest of my time on my friends.

Calle: Do you have any last words you want to say?

Maryann: Remember that my first single ''Shock Me'' is out now on itunes, Amazon, ect. And thanks to all who have supported me - you're the best! Then become my friend on Facebook - Twitter - Myspace, and visit my official website.

Click on the banner to visit Maryann Cotton on MySpace