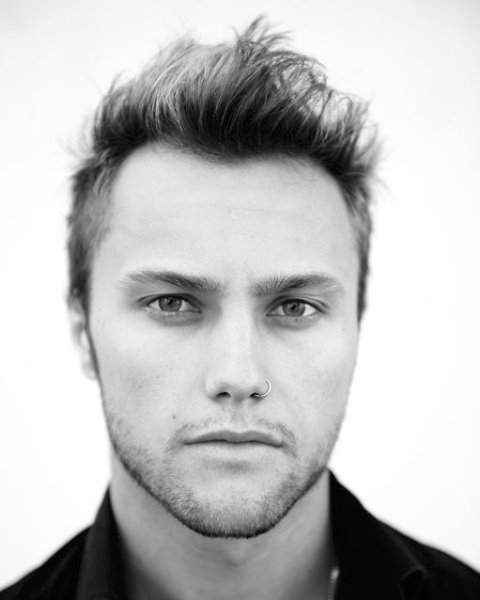 Mark: I started singing in primary school. My Dad's a Dentist, but he would go in a musical theatre production in my hometown every year and he still does. When I was 10 he encouraged me to come along to the auditions with him and we both ended up getting lead roles. I've been singing ever since.

Mark: AC/DC and the Young brothers are what really got me into rock music. I really love the Foo Fighters too; those 2 bands are probably my biggest influences for . I'm a huge fan; Myles Kennedy and Mark Tremonti are an incredible team. I really dig Whitesnake too.

Calle: You play in the based band Shotgun Alley. Can you describe the music to people who haven’t heard you before?

Calle: Shotgun Alley will release their debut album in October. What can people expect from the album? 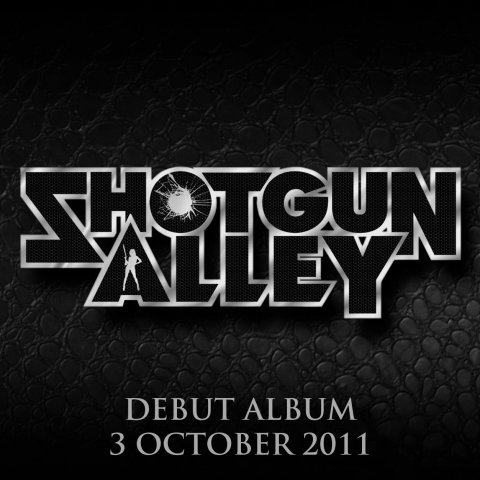 Mark: We've gone for a sharp, modern production sound. There are a lot of textures to our songs if you listen carefully and we wanted it to be huge. The songwriting is a mix of old and new, but it's all rockin! Lots of guitar solo's and gang vocals. The main thing we wanted to accomplish was making the songs catchy and memorable, hopefully people will agree.

Calle: The album was supposed to be released in the end of August, but the release date has been postponed. Why the delay?

Mark: The distributor wanted to delay it a couple of weeks for whatever reason so we decided to push it back further so that it coincides with our New Zealand tour. Now the album and tour are only a week apart. It was actually supposed to be out in May! Standard bullshit really… We're just glad it's finally happening.

Calle: How was the recording process of the album and who writes the music and lyrics?

Mark: The entire album was already recorded before I’d even joined the band. I hung out with the guys in the studio in LA while they were recording over a year ago, but I didn't join the band until March this year. The original vocals were removed and I recorded all my vocals in Jimmy's (our keyboard player/producer) home studio in . It was nice to have everything done for me; all I had to do was walk in and sing! But having said that, I’m really enjoying co writing new stuff with the boys for the next album. This album was written by Jimmy, Dave, Scott and Rj (the previous singer), i co wrote the final song on the album "Can't Stop The Rock" with Dave and Jimmy.

Calle: What song or songs on the album do you like the most?

Mark: I love the attitude and groove of "Walk Away" and the riff in "Waiting To Fly" is a fuckin' killer!

Calle: You’re going on tour in soon. Will Shotgun Alley also be touring Europe or the ?

Mark: The short answer is yes. We're working on getting a spot on some summer festivals in Europe for next year and possibly relocating the band to the northern hemisphere, where and when is still to be decided, but we just want to play and get out there so it will certainly happen. Europeans really know what it's about when it comes to rock!

Calle: What can people expect when they go see Shotgun Alley live?

Mark: A great time! We put on a big show and really try to make it more than just seeing a band play. We all work hard at being the best individual players we can be and we want people to get involved, have a sing along and really remember the show. 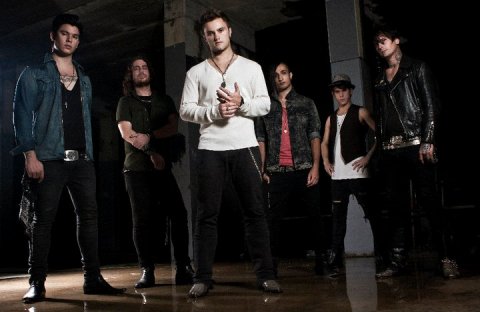 Calle: What bands have you shared the stage with or opened for and what bands would you like to play with?

Mark: We've been really lucky to play with some epic bands. So far we've played with Alice Cooper, Slash, ZZ Top and we're about to support Def Leppard and Heart! Personally, I’d be stoked to play with Whitesnake. Coverdale is such a weapon! And Doug Aldrich and ? Those guys are amazing. I'd actually love to play with Winger too, such great musicians.

Calle: What’s the most fun/crazy experience you have had during a show or tour?

Mark: On tour we busted 2 hookers who were "working" in the hotel room next to me and Scott once. All these random old dudes kept showing up outside our room and we could hear the ladies taking care of them through the wall… It was pretty funny!

Calle: How would you describe the rock scene in and right now?

Mark: They love rock music down here, but there just aren't anywhere near as many people as there are in say Europe or the . It's harder to tour here because you have to travel further for the gigs, not an easy task when you're a new band with no money. It's still so much fun regardless and we've been getting some awesome support. The NZ tour is gonna be killer.

Calle: How would you describe the other members of the band in only three words?

Calle: Where do you see Shotgun Alley in 10 years?

Mark: On the road, somewhere in the world, about to play an awesome show! I don't wanna do anything else. Jamming with these guys is too much fun.

Mark: Practice. Don't be lazy, be the best musician you can be and most importantly, write amazing songs. If your songs suck it doesn't matter how good you are. 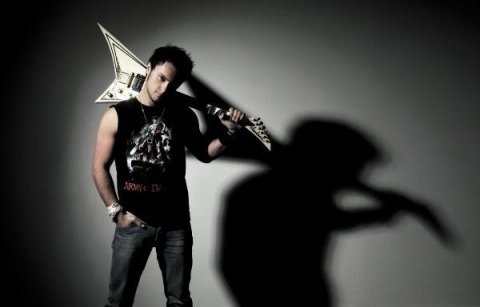 And now some questions outside Shotgun Alley’s music:

Calle: You also have your solo side project called . How did that project/band start?

Mark: I started a really long time ago. It's basically the band I created as soon as I knew I wanted to be in a band! There have been other members in the past, but these days it's my solo/side project that I write and play for in my spare time. When I can I put a band together and play some gigs and I’ve got shitloads of songs that I have to put into something or I feel like my brain will explode.

Calle: has released a few singles for free download. Do you have any plans on releasing a full-length album?

Mark: Yeah, the music industry is so different to what it used to be so instead of making people wait i prefer to just release my songs as soon as they're finished for free. Once I have released 10 tracks I’ll put them into an album format and it will be available online and at gigs, but I’m gonna continue to release each song as soon as it's done because I don't have the time to record a whole album at once.

Calle: You did a guest appearance with Steel Panther at The Key Club. How did you get the gig and how was that experience?

Mark: That was rad man! One of my friends in LA knows the band so we went and said hi before the gig. I was talking to Michael and asked him how his voice was, he said he was a little tired and asked me if I’m a singer. I said yes so he said "Cool, I’ll get you up on stage to help me out"  (Mark did "Sweet Child O' Mine with the band- see fanvideo here) 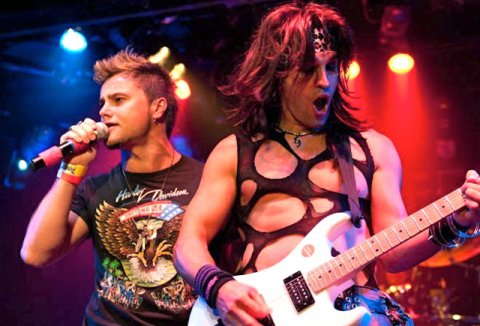 Calle: Besides the music you also have an acting career. What movies or TV-series have you been in?

Mark: I've been acting as long as I’ve been singing, which started from the musical theatre I guess. I was in an Aussie TV show called Home and Away for 4 years, I more recently played a cocaine addict in a show called Underbelly: The Golden Mile, i threw a cat out a window! I also played a lead singer in a film called A Heartbeat Away, amongst other projects I’ve worked on.

Calle: As I understand it, you’re living in at the moment. What made you move there?

Mark: When things didn't work out with the other members of I decided to relocate to a country with a bigger market place and start again. There's a lot of opportunity in LA for music and acting and I was getting complacent in so I just went ahead and did it.

Calle: Why do you use two names (Falcon and Furze)? 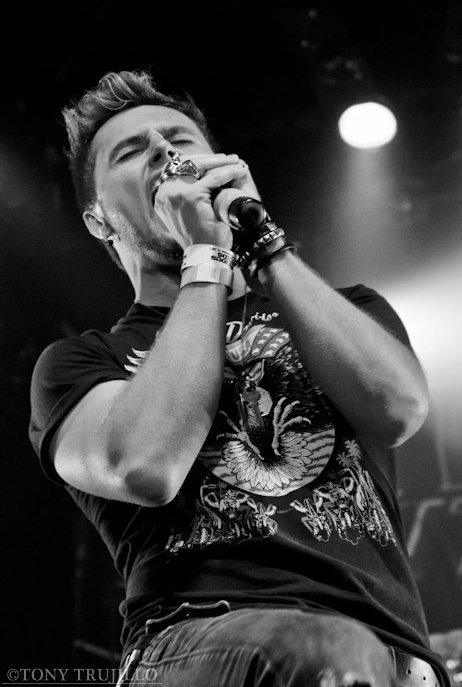 Mark: Well, 2 reasons. A lot of people in the , and know me from when I was an actor on a soap and I wanted people to just hear my music without judging it by anything other than the music. The second reason is that my real last name in German means fart! Now, rock music is huge in and I intend to play a lot of shows over there and there's just something a little uncool about a dude named "Mark Fart"...

Calle: What was the best concert you’ve ever attended as a fan?

Mark: Megadeth played at this tiny venue in Sydney at a university on '04, it was the first proper metal show i'd ever seen and experiencing such a huge band at such a small venue was incredible.

Mark: “Back In Black”. It's so simple, yet so tough! That riff is just mean and i don't think I will ever get sick of hearing that song.

Calle: If you could put together your dream band, who would be in that band?

Mark: They aren't that new, but if you haven't heard of , do yourself a favor and get all 3 of their albums. A great mix of being so melodic and really heavy. There's a great hard rock band from called Electric Mary that are definitely worth a listen. And a British band called Heaven's Basement are a very cool band too.

Mark: In no particular order..

Calle: If I say what’s the first thing that comes to your mind?

Mark: Playing and writing music man. But maybe I’ll be doing it from a floating stage by then.

Mark: If you ever see me come say hi and we'll talk about rock!

Check out Shotgun Alley by clicking on the logo

Check out Falcon Road by clicking on the logo
The End